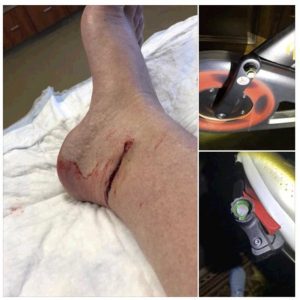 Broken Peloton Pedals: freak accidents, or the start of “Pedalgate?”

Recently, a Peloton rider posted an emergency room photo of a painful-looking laceration to her ankle. She reported that one of the pedals on her Peloton bike had sheared off while she was riding. Soon there were literally a thousand comments to this social media post, with some other riders telling stories of broken pedals, and the question was in the air: are Peloton pedals dangerously defective?

This week, Peloton responded with a post that said, in part:

We have no reason to believe that the recent issues flagged in this group were caused by a product defect. Every model of pedal ever included with a Peloton Bike has been tested and certified as compliant…. That said, pedals on any stationary bike need to be replaced on regular basis…

This is where I started to get interested. Is that true, that pedals need to be replaced on a regular basis? Most bicycling resources do not list pedals as wear items (like brake pads, tires, or even chains). Do they need to be replaced? Did the fact that Peloton specifically mentioned “stationary bikes” mean that they’re different in this regard?

Before I attempt to provide my thoughts on the subject, let me state firmly that I claim no special knowledge or expertise, and you should not consider calling me as an expert witness at your product liability trial. This is armchair analysis, but hopefully thoughtful armchair analysis.

The Defense’s Argument: Peloton has exercised due care

So, let me start with the most obvious question, whether or not one should expect a bicycle pedal to break and that they should not be considered “lifetime” components of a bike. The answer is that if you ride your bike enough, eventually your pedals will break. This is pretty basic materials science. What you have, in the pedals, is a metal rod that is subjected to a shearing force repeatedly (once per RPM, and maybe even twice if you want to consider the effect of the “upstroke”). Man has not created a material that will last through an infinite number of cycles of stress. Pedals break, as do crank arms and any other component that is stressed when you ride.

So, if pedals don’t last forever, we’re left to ponder the expression “regular basis,” as in, “pedals on any stationary bike need to be replaced on a regular basis.” Peloton didn’t exactly specify what they mean by “regular basis”, but elsewhere on the site they recommend replacing them every 12 months. I did a bit of digging to see if any OEM bike or pedal manufacturer has a recommended interval for replacing pedals, and while I did see other notices that pedals do suffer from stress fatigue, there is very little in the way of guidance as to what the right interval is. In fact, I found only one (bicycle) manufacturer who even ventured to give a number, and theirs was 5,000 miles. 5,000 miles in 12 months is not a completely unreasonable number (I’m on track to do that myself this year), particularly for a bike that is shared.

So, my informal investigation seems to lead to the conclusion that Peloton is probably OK here. They say that their pedals have been tested and certified, meaning that they meet the minimum acceptable standards, and that should be enough to protect them in court. Whether they did enough to educate their users that pedals need to be changed out occasionally is something for the lawyers to argue.

Now that I’ve concluded that, based on the currently available evidence, that “Pedalgate” is not a thing, let me argue the other side for just a minute. If I were the prosecutor, my case would be based on the following…

The Prosecution’s Argument: Peloton could have done more

Peloton pedals may be certified as meeting at least the minimum performance standards required, but consider this: Peloton knows (or can know) with astounding detail exactly how much stress is being put on those pedals. Every RPM is counted, and the power being applied to the pedals is calculated at least as frequently as every RPM. Peloton should be able to tell you precisely how many stress cycles your pedals have been through, the magnitude of the stress, and how many more they should withstand. For all intents and purposes, the Peloton world is one giant laboratory for such things. With the sort of data they collect, Peloton could alert customers that it is time to change their pedals, just as your car reminds you to change your oil periodically. With the sort of data at hand, there should never be a pedal failure, because there are no unknown variables. Any pedal that fails in the field is presumably not a pedal that would have passed the certification tests, and by that logic Peloton would have some responsibility in selecting pedals that they know (or should know) cannot withstand the workload.

I’ll update this post if there are any noteworthy developments. Until then, be warned that Peloton expects your pedals will last about 12 months. In the past, they have offered free replacements after the first 12 months of ownership, but it is unclear if that policy will continue.

RT @PSPCA As you may have heard, the U.S. House of Representatives passed a bill last week that would make certain types of animal cruelty a federal crime with up to seven years in prison. But, the bill isn't as broad as people think. More: ow.ly/vheY50wWLIq

Hmm, no 1/2 price pizza offer from @PapaJohns for the Flyers’ win? I guess I should be happy they think the Flyers are going to win too many games this year, but on the other hand I could go for some cheap pizza right about now.

@LungNE is the route for the AEBT the same as last year? If not, where can we find GPX or TCX files? Thanks.