Jim Croce: I Got A Name 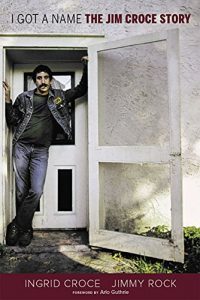 A scientist named Konrad Lorenz popularized the concept of “imprinting”, which brittanica.com defines as “a form of learning in which a very young animal fixes its attention on the first object with which it has visual, auditory, or tactile experience and thereafter follows that object.” Lorenz is famous for the way he was followed around campus by the geese he raised.

I think I had the same experience with the music of Jim Croce. I suppose I was in an impressionable age right during Mr. Croce’s brief moment in the sun, in the mid 70’s. If you ever wondered whatever happened to the guy who sang “Time in a Bottle”, “Operator” and other staples of the era, Jim Croce died in a plane crash in 1973, just as his star was beginning to rise. He has a half-dozen songs that are modern classics: besides “Time in a Bottle” and “Operator”, he wrote and sang “You Don’t Mess Around with Jim”, “Bad, Bad Leroy Brown” and a couple others that everyone knows more or less by heart. These songs were part of the soundtrack of my house. He only made five albums, and two of those were very obscure releases that were probably “lost” until the digital age revived everyone’s back catalogs. Unless you’re a super-fan, everything Jim Croce ever did fit on three albums.

A more official count, according to Wikipedia, numbers seventeen compilation albums, and I can recall more than once buying a “new” Jim Croce album for one or maybe two songs that weren’t on the albums I already owned.

I think it’s sort of amazing now the way I feel I was influenced by Jim Croce’s music. I was in elementary school when his music became popular, and it’s really not possible that I could have identified with pretty much any of the themes of his music. Many decades later, I still know essentially nothing about truckers, pool hustlers, or trying to buy weed. Even the songs that today I really can appreciate, such as “Which Way Are You Goin’” (a song about conservative hypocrisy), couldn’t really have been meaningful to me at the time. Still, there’s something in the sound, and in the sound of the man’s voice that left a lasting impression. It’s probably the reason why I still have such an affinity for acoustic guitar music.

As fate would have it, I live in the same area that he did, though it’s all a bit less rural than it was in the 60’s and 70’s. I often travel in and through the same towns he lived in, and visit some many of the same places, and it is strange to think that at least at some point I have literally walked in his footsteps. Still, I have to admit that he’s not as big a phenomenon here than I would have thought. I play a few songs of his when I perform, but I can’t remember anyone ever requesting a Jim Croce song in what has to be dead center Jim Croce country. I confess to a bit of disappointment on that account.

This week, I read “I Got a Name: The Jim Croce Story” a biography written by Ingrid Croce, his widow. I enjoyed learning more about how his songs came to be and about the drive he had to make music.

Biographies seem to always be, by their nature, flawed. It is very hard to write about the life of someone without introducing some sort of judgment. If the biographer is an outsider, that judgment is usually negative (maybe because it makes a better story), but if the biographer is close to the subject then events tend to be seen in a much more positive and forgiving light (just read Eric Clapton’s autobiography for an example of an author letting his subject off the hook over and over again). Ingrid Croce, it seems, tries to be candid about both the good times and the bad, and I don’t think that’s an easy thing to do if you feel you’re writing the definitive work on a person’s life. I give her credit.

Another thing I think was a positive is that she confines her narrative to the time they were together (his early college years up until his death at the age of 30). The book is very much from her perspective, and she tries not to ascribe motivations to his actions except to talk generally about the financial hardships they endured, the pressure he felt from his family to get a “real job”, and his increasing use of/reliance on drugs. The down side is that is that some of his behaviors seem contradictory or sometimes inexplicable, and there’s not much explanation given. Still, I guess the only alternative would have been for her to assume she knew exactly what was going on inside his head, and that’s a presumption that no biographer should attempt.

I am glad that I read this book, as it gave me a little greater understanding of how his songs came to be. It’s also a great book to give someone you know who is looking to make music their career… if you want to discourage them, that is. Due to what his wife ascribes to exploitation by his publisher, Jim Croce seemed to be almost penniless for his entire life. This is a guy for whom making music was more important than anything, and you certainly have to admire that sort of dedication. As for the man himself, well, I think it is a mistake to judge others, particularly those who lived in different times and in different cultures. Certainly, there were a lot of ways in which he didn’t seem to live up to the idol status I had for him, but then again one should never meet one’s idols.

Followers: 962
Buddy @TeamK9Buddy
2 weeks ago
My good friend Mia, a puppy mill breeding dog, was adopted this week and is now in happy retirement. Best day ever. https://t.co/ljCNhwcKry
View on Twitter
0
0
Follow @TeamK9Buddy