A Visit to Punxsutawney 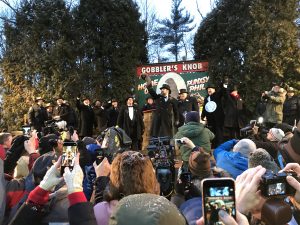 For the past 132 years, a groundhog in Punxsutawney has been predicting the weather. Based on whether or not he sees his shadow, we will have either six more weeks of winter or an early spring. It’s science.

This year I decided to travel there to get the forecast straight from the woodchuck’s mouth.

If you don’t know me personally, let me tell you that this is not something I would ordinarily have considered doing. For one thing, the forecast is given at sunrise on February 2nd, and I know from years of early morning dog walking that you should expect a pre-dawn event in the middle of winter to be more than a little chilly. What swayed me this year is my brother, who had gone to the event last year and invited me to return with him this year. He’s generally considered to be a fairly smart guy, and if he’s actually interested in going to this thing TWICE, well, I had to find out more.

I drove up through scenic central Pennsylvania, past billboard praising Jesus and coal (though not both on the same sign — yet). Punxsutawney is in the mountains of west-central Pennsylvania, the sort of town that has a runaway truck ramp on each road leading in. The scenery on the five-hour trip was terrific… mostly wooded hills and farms, but I did drive over at least one frozen river that was very picturesque.

Punxsutawney itself is a town of about 6,500 people, small enough that you actually find yourself running into the same people occasionally. Night life, as far as I can tell, centers around a bar called “The Burrow”, not to be confused with “The Burrow”, the actual burrow that Phil lives in, which is a few blocks away. Nothing in Punxsutawney seems to be more than a couple of blocks away from anything else.

I should mention, in case you are not aware, that the film “Groundhog Day” was not actually filmed in Punxsutawney, but rather in a small town in Illinois. Evidently, the square in the Illinois town was more appealing than the square in Punxy (and there is one, called Barklay Square). There was, if I remember my trivia correctly, also something to do with the remoteness of Punxy which made it difficult to develop and deliver the dailies in time. Anyway, if you haven’t been to Punxsutawney, you haven’t seen Punxsutawney.

Despite not being the town pictured in the movie, the character of the real Punxsutawney is actually very much like the one in the film… even more so than I expected. Everyone I met was very friendly, and everyone buys into the Groundhog hype. They take it very seriously, though they don’t take themselves very seriously, so it all ends up just being a lot of fun. It’s like the entire town is having a party.

Off to Gobbler’s Knob

Most of the festivities take place the day before, but the big event itself is held on the morning of February 2nd, on Gobbler’s Knob, a field just south of the town (and not in the square as shown in the movie). Somehow, I always imagined Gobbler’s Knob to be a hill, with Phil’s stump/podium at the top. In fact, the stage with Phil’s stump is actually at the bottom of a hill, which works better because the crowd can gather on the hillside and everyone gets a good view.

The best view is from a cordoned off area in front of the stage, accessible only to those with a coveted “Inner Circle” pass. I had the good fortune to obtain an Inner Circle pass prior to coming to Punxy, which is good because my brother and I lost the finals of the cornhole tournament for which top prize were four of the passes. How did I get my passes, I had the good fortune to have a fellow traveler who thoroughly researched how to do Punxsutawney the right way, which is how I got to the Groundhog Club luncheon and a photo op with Phil, and a room at the better of the two hotels in the town. Top tip: when you go, make sure you have an insider with you! (Oh, and start early. After the forecast on the 2nd, we returned to the hotel to get a hot shower and breakfast. While at breakfast we could hear the receptionist at the front desk fielding calls for reservations for next year’s Groundhog Day.)

We arrived at Gobbler’s Knob at around 5AM, and the entertainment was in full swing. My hat is off to every entertainer there, but particularly to the people who played stringed instruments in fifteen degree weather. I don’t like playing when it’s below sixty degrees, but there was a guy playing mandolin (and playing it well) while the rest of us were clutching our chemical hand warmers inside our thick insulated gloves. At about 6AM, a belly dancer, barefoot and wearing about as much clothing as a captive Princess Leia, entertained the crowd. That’s commitment.

If you haven’t seen the movie “Groundhog Day”, stop what you’re doing and go watch it now. It is one of the best comedy movies of all time. Being a comedy, there really was no imperative to get anything at all right about the Groundhog Day event, and so I was surprised to see that it was closer to reality than I expected. The one single thing that struck me as totally off was the time of day: Phil’s prognostication comes at first light, meaning that all of the preamble occurs in the pre-dawn hours. In the movie, Phil Connors (Bill Murray) arrives on the scene for his report in broad daylight. In reality, we’ve all been freezing in the dark for hours before Phil makes his appearance. The emcees did a good job keeping everybody distracted, singing versions of “Margaritaville” and other classics with customized lyrics for the occasion. The audience cheered, partly because they were entertained, partly out of appreciation for the effort, and partly because there was little else to do. At about 6:30 AM there was a fireworks show which was very impressive, even better than the 4th of July in my town which has a considerably larger population.

Daybreak came at 7:24AM sharp. Phil directed Bill Deely (President of the Inner Circle, and whose name, when said twice, sounds quite a bit like a tag line for a certain light beer ad) to the appropriate scroll, and he announces six more weeks of winter (it’s almost always six more weeks of winter). Even before he did, you could hear murmurs in the crowd: “[Phil] picked the winter scroll!”

A Long Run for a Short Slide

And, like that, it’s over. By 7:30, the town is emptying. A few return in the summer for the Groundhog Festival, but for the most part that’s it until the next February 2nd.

I went to Punxsutawney without much background or expectations. I didn’t even know before I went whether it was “Groundhog” or “Groundhog’s” Day. I left having experienced one of those things that everyone hears about but that very few people actually do. Would my life have been complete without this experience? Of course. Nobody really needs to stand in a field for hours in fifteen degree weather to wait for a groundhog under pretty much any circumstances. But I do honestly feel richer for having had the experience. Despite being world famous, Groundhog Day in Punxsutawney has a small-town intimacy that can’t be fabricated, and once I got the feeling back in my fingers and toes, I was glad I went.

RT @PSPCA As you may have heard, the U.S. House of Representatives passed a bill last week that would make certain types of animal cruelty a federal crime with up to seven years in prison. But, the bill isn't as broad as people think. More: ow.ly/vheY50wWLIq

Hmm, no 1/2 price pizza offer from @PapaJohns for the Flyers’ win? I guess I should be happy they think the Flyers are going to win too many games this year, but on the other hand I could go for some cheap pizza right about now.

@LungNE is the route for the AEBT the same as last year? If not, where can we find GPX or TCX files? Thanks.