Is the Tread What Peloton Really Needs? 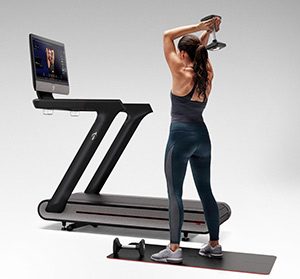 Last week, fitness startup Peloton (you’ve seen their commercials) announced their second product, an Internet-connected treadmill called “Peloton Tread”. This is a pretty dramatic step (no pun intended) for the company, but (pun intended this time) are they putting their best foot forward?

I’m not an expert in the fitness industry, and I’m not even much of an athlete. That said, I’m an active (bordering on fanatical) Peloton rider and I’ve been following the company closely. I’ve become a big fan of the Peloton bike in the past six months since I worked it into my daily schedule. I’ve seen some big gains in my fitness (my doctor was very impressed) and on many days the 45 minutes I spend on the bike are the best 45 minutes of the day. The $2K cost of the bike plus the $39/month subscription, while extravagant by my tastes, has been worth every penny.

So, I’m definitely a fan, but that doesn’t mean that I necessarily agree with every move Peloton makes. And I’m not all that enthused about the Tread, at least not yet.

The New York Times wrote a very good article (What a $4,000 Treadmill Means for the Future of Gadgets) that captured many of the reservations I have, and it’s worth a read. They discuss the price ($4,000) and some of the ways in which the treadmill is different from the bike and therefore might not expect the same level of success.

On top of these observations, I would add one more. When the Peloton bike came to market, they had a model to emulate: the spin class. The Peloton bike faithfully reproduces the spin class experience (so much so that the rider of the Peloton bike is expected to set his or her own resistance via a large plastic knob, where exercise bikes costing much less will do so automatically). You can capture the Peloton bike experience in a sentence: it’s a spin class you don’t have to leave home for. For someone like me, that’s the difference between spinning and not spinning.

Is there an analog for running? Although I am not (nor have I ever been) current on exercise trends, I don’t think there are running classes, where a room full of people come together to run on treadmills, led by an instructor. My own experience with the row of treadmills at health clubs and fitness rooms is that it’s a solitary activity. Each runner has his or her earphones in and is usually watching Headline News on TV, as far as I can tell.

Peloton seems to recognize this, and even in the very first paragraph of their email announcing the Tread to current Peloton members the company asks us to look at it as more than a treadmill:

On behalf of the entire Peloton team, I am incredibly proud and honored to announce the launch of our second-ever product, the Peloton Tread™. While we believe it is absolutely the best treadmill ever created, its name and looks are a bit deceiving. Similar to the Peloton Bike™ being #morethanabike, the Peloton Tread is much, much more than a treadmill.

The plan, as it’s been variously described, is that a Peloton Tread workout will be more than running on a treadmill. It will be weights, isometrics as well, so that the workout is not just lower body and cardio (which the Peloton already covers as well). Even the first promotional video, seen on the Peloton website, has as many scenes of our fitness model working out OFF the treadmill. The photo accompanying this article is striking to me because the model isn’t even on the treadmill, instead using it as a $4000 monitor stand.

I am having a hard time getting my head around it: the pitch for the super-expensive treadmill contains the assurance —up front and center— that you will be doing lots of things other than running on the treadmill. It’s a big piece of equipment to be used as a video monitor. And speaking of that, I find it somewhat inconvenient to use my Peloton bike for the “beyond the ride” (off-bike stretches and dumbbell) exercises because the bike itself is often in the way. It’s hard to lie on the floor and try to follow the instructor’s lesson when there’s a large exercise bike in the way. I don’t see that situation being much improved with the Tread.

I hope I’m wrong about that. The “beyond the ride” feature is very compelling and I hope that the new Tread workouts spill over to bike users as well. In the meantime, I am going to be following the rollout of the Tread with some trepidation. Peloton is a quick-growing company with an exciting product in the bike and a lot of potential, and this is a major step that I’m not sure is in the direction that I think they should be going.

What direction do I think they should be going in? I’m glad you asked. If you read my post from last week, Analytics vs. Analysis, you may already know where I’m going. If you haven’t read it, well, you should. Go ahead. I’ll wait. Remember to click on the ad at the bottom and buy whatever they’re selling you, too. Thanks.

To me, the thing that is missing from the Peloton experience is connection. Despite the fact that I’m watching live video, and competing on the leaderboard against real people, I am essentially on my own in pursuing my fitness goals. While the instructors occasionally shout out the usernames of some riders (“Looking good, CrunchyFrog!”), they are really not in a position, with five hundred or more people in the class, to give personalized advice to anyone (even if a spot check of a rider’s stats would be enough to go on). This, I believe, is the next frontier in at-home fitness classes, and it’s going to be a hard one to cross.

What would make this such a challenge is that giving personalized advice is not something that I’ve seen any computer algorithms do well. My Apple Watch sets a calorie goal for me, and if I meet the goal, it suggests a higher goal. That’s not intelligent advice; it’s a five line computer program from programming 101. As I mention in my post from last week, it’s easy to report that I ran 1.71 miles today, but is 1.71 miles good? Will it improve my fitness? Depending on my physical condition 1.71 might be a monumental accomplishment or it might not be noteworthy at all.

Despite all of the metrics and connectivity that the 21st century affords, in the end I am still my own coach (not to mention nutritionist and medic, but one thing at a time…). It is still up to me to understand what all the analytics tell me, to assess my progress toward my goals and to create and refine my plan for getting there. This is where Peloton could really change the game.

Unfortunately, it seems to me that providing these sorts of services would require a lot of manpower. It would be necessary for someone at Peloton (not necessarily the class instructor, but someone) to actually know who I am, what my fitness history and goals are as well as information such as injuries and other limiting factors. My personal coach would also need to be qualified to give me advice, which seems obvious but in practical terms means that the company would not only need to hire people but that these people have special training. I don’t know how many people it takes to produce one segment of Peloton programming, but once the studio is set up I can’t imagine it requires more than two or three. So whether there’s 100 or 10,000 people taking the ride, the investment is fixed (and low). The sort of involvement I’m talking about would require maybe one person for everyone twenty or thirty members, so the more riders you have, the more staff you need. It is not a great equation for making money.

I hope the Tread is a success for Peloton. I hope that the “beyond the ride” offerings continue to evolve and that they’re able to provide a complete home fitness solution. In my humble opinion, it’s going to require offering personalized guidance to their customers, and that’s an expensive proposition. When I see the Tread, I can’t help but feel that they’re avoiding this inconvenient truth and instead attempting to recreate their bike success with a treadmill. Time will tell if this is enough to keep them going.

UPDATE: Entrepreneur Magazine posted an interesting article about the future of Peloton, and the Tread’s place in it. It’s worth a read.

Here’s my background on the subject of this essay, so you can decide how much credence you want to put into the opinions I present.

I am not an expert in the area of physical fitness, and I have no inside information on this company. I don’t have a gym membership, and generally don’t buy really expensive things. However, I do own a Peloton bike and have been a Peloton member for about half a year. I’ve been following the company closely, and have read most everything I can find published about Peloton. Am I right about the Tread? Time will tell.

Followers: 962
Buddy @TeamK9Buddy
2 weeks ago
My good friend Mia, a puppy mill breeding dog, was adopted this week and is now in happy retirement. Best day ever. https://t.co/ljCNhwcKry
View on Twitter
0
0
Follow @TeamK9Buddy